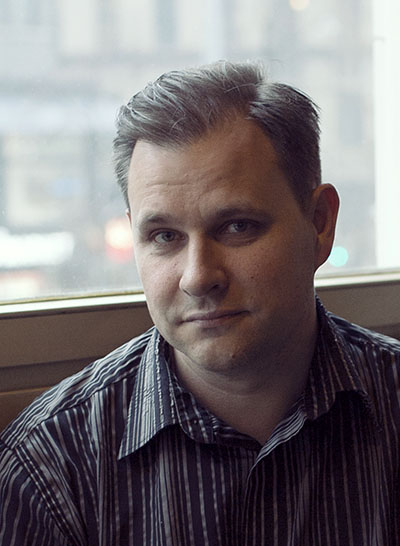 I’m Ilkka Pirttimaa, developer of an iOS app called BlindSquare. Uniquely it uses Open Street Map and Foursquare data to help people who are blind to navigate in new and familiar environments and provide them with a world of choices, otherwise veiled. I write this in the spirit of the intent of the Global Accessibility Awareness Day, to raise awareness across the globe of the benefits and know-how on making products accessible. This needs to be done; and is the right thing to do, it doesn’t need to be difficult.

For people who are blind or partially sighted, travelling independently has always been one of the challenges. While some have managed to become very confident travellers regardless, others, especially if they have lost sight only recently, need more time or assistance to learn how to navigate new environments. Although technology can never substitute Orientation & Mobility and cane travelling skills, the right app installed on your iPhone can help blind and partially sighted users who have mastered the necessary skills to be safer and more independent when out and about. Having been localized to 25 languages, it is now used by thousands of people in more than 130 countries.

I started developing BlindSquare by chance. When I read what Wikipedia had to say a few years ago about augmented reality, I wanted to prove that augmented reality should not only include visual, but also auditory perception. It seemed only logical to me that the traveler who is blind would benefit the most from that. I managed to find my first blind tester and when I saw how enthusiastic she was about the prototype of BlindSquare I had created and about its future potential. I decided to continue with the project. When I released BlindSquare 3 years ago, it did not yet include many of the important features available today. But still, I received very positive feedback and saw how it improved people’s quality of life. I received a message from someone who had used BlindSquare at a water park and had been able to find all of the attractions there using my app. BlindSquare users enjoy being able to explore their environment on their own and also to be able to help their sighted friends to locate places in unfamiliar areas. After all, the friends cannot look around corners, but thanks to GPS, BlindSquare can. Although BlindSquare is optimized for VoiceOver, it is perfectly usable for everyone. I have sighted customers who enjoy hearing popular Foursquare places announced to them while they are riding their bicycles.

My app is geared towards customers who are blind or partially sighted, but I think that every developer should consider if their product could be made accessible and whenever possible walk the extra mile. It is just like app localization, it increases your user base. Let us just take an example and assume that you develop an app that gives access to public transport schedules of different companies and in many cities around the world. Sighted users may have many apps they can choose from, but your app might be the only one that is VoiceOver accessible. Sighted users can also just read the schedule at the station, an option not available to blind or partially sighted users. While your app can be nice to have for many users, it can be a life-changer for people who are blind or partially sighted, as it may be the only means to access information independently. The same is true for many other apps that come to mind.

The World Health Organization estimates that worldwide 285 million people are visually impaired, and 39 million of them are blind. 82% of the visually impaired are 50 years and older. Developing accessible apps is an important contribution to creating a society where everyone can live as long as possible independently and in dignity. The screen reader and the zoom feature integrated into each Apple product make it accessible to every visually impaired user. The iPhone gives users who are blind or partially sighted access to information that would not be available to them otherwise.

Apple provides excellent documentation about iOS’ accessibility features. To learn more about VoiceOver really quickly, configure your iOS-device so that VoiceOver turns on when you press the Home button three times, so you can switch it on and off quickly. If your language is supported by Siri, you can even tell her to turn VoiceOver on and off. Now you can start to learn how it works. If you want to make a game of it, you can play through the VoiceOver tutorial by LookTel. Once you know the basics of VoiceOver, look at your app and see if it works with VoiceOver.

Accessibility is not just an additional feature, but a best-practice. After all, web developers test for compatibility with different web browsers, too. When you start developing an app and use standard elements, accessibility labels and label images, it is most likely that your app will be accessible as iOS has built accessibility right in. However, as soon as you want to make it more appealing visually, you should know how to develop accessibly and make sure that your app’s facelift does not make it unusable for blind people.

Connect with your users and find out how they use your app. Ask them for examples of apps that work well for them, look at these apps and learn how and why they are accessible. AppleVis, a site run by blind and partially sighted iOS users, is an excellent place to get feedback and find eager beta testers.

My wish: I hope many developers will embrace accessibility. It will not just increase their user base, but it will make a difference in the quality of life of many people.